Empowering Lithuania’s Youth Around the World


Young Lithuanians from across the globe converged on the Prienai region last month to get back to their roots, and encourage and strengthen ties between Lithuania and members of its youth community, no matter where they live.

“I believe the best part about the PLJS summit for everyone was the feeling of unity during all the days of the event,” said Darius Tamauskas, a PLJS board member who currently works in the United Kingdom.“Reuniting with old friends and making new ones is what made this event special.”

Lithuanian youth participated in discussions and lectures, sharing their own experiences and learning from representatives of business, education, politics, culture and innovation.

“Lithuania has a rich talent pool, which does not end at its borders. There are accomplished and driven Lithuanians all around the world, and bringing them together at an event such as this, or other similar events, is essential to Lithuania’s ongoing growth,” said Stasys, a former PLJS Chairman who currently lives in Canada. “Events like these allow Lithuanians all around the world the opportunity to feed off of one another’s passion, and to collectively do good for Lithuania.”

The World Lithuanian Youth Association (Pasaulio Lietuviu Jaunimo Sajunga, PLJS) was founded in 1972. Members focused on the organization’s approach to resisting the Soviet occupation and unifying Lithuanians across the world. Since then, PLJS has grown to include more than 40 chapters and maintains relations with governmental institutions and youth organizations.

Rima Gungor, an American Lithuanian from Illinois, filmed moments from the PLJS Summit for a documentary about Lithuania’s non-violent revolution. Gungor said she sees PLJS as a bridge between Lithuania’s past and future.

“The final part of the documentary is about present day Lithuania and how far it has come. PLJS represents that important phenomenon of a global Lithuania. I wanted those moments ideally to show the vitality of Lithuania and its investment into its own future and the energy of the younger generations to keep moving Lithuania forward,” she said.

President Dalia Grybauskaite was the summit’s Honorary Patron opened the event. She also led an exclusive discussion about politics and economics with PLJS delegates living abroad. 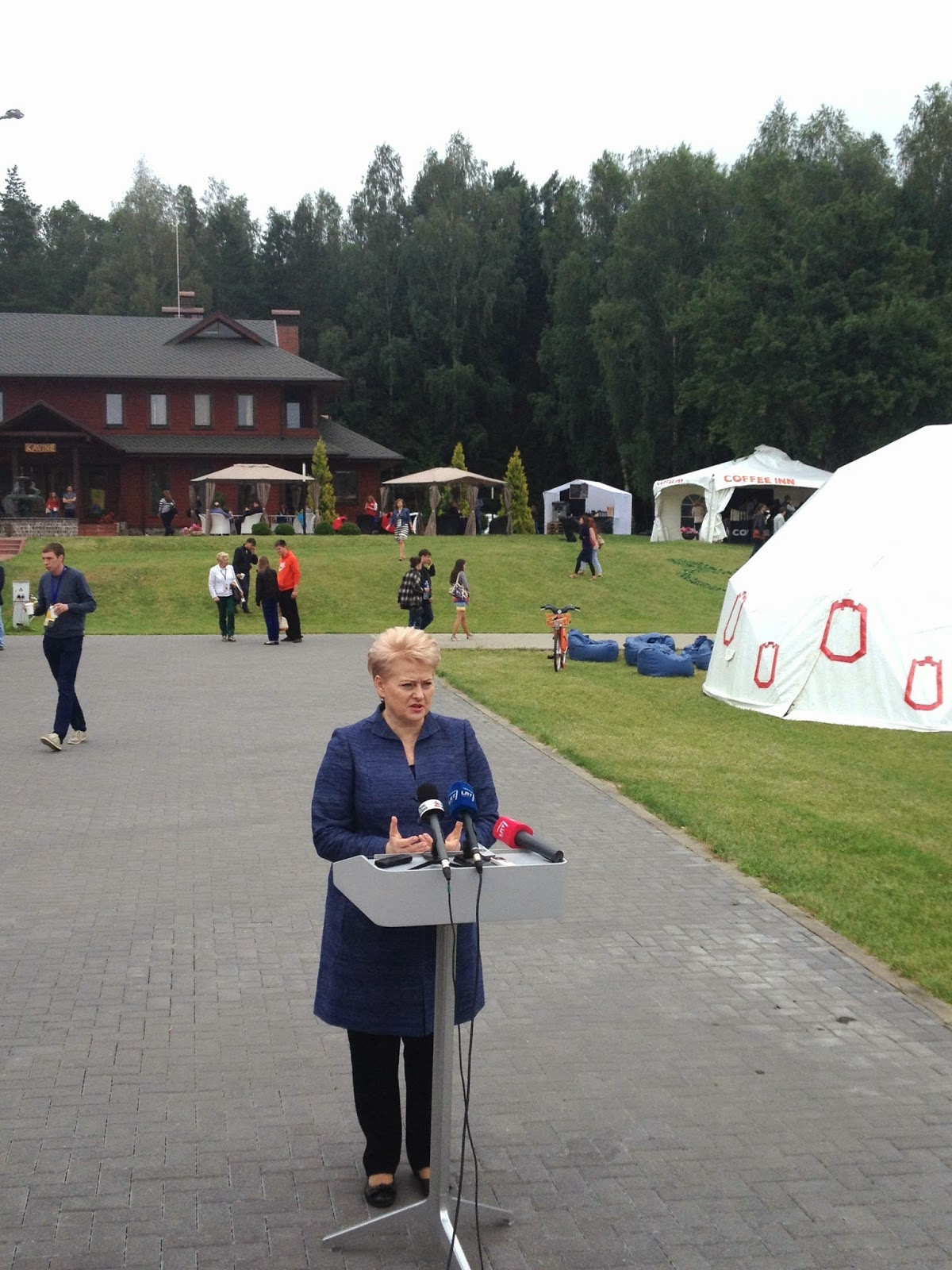 “It was a very straightforward meeting where the President explained her position and views of both domestic and foreign policy without ‘political correctness.’ Even those not interested in politics must have enjoyed the meeting and understood the position of the President and what she is facing on a daily basis,” Tamauskas said. “She was so open about what she wanted to share with us that at one point of the meeting she asked a current member of parliament to leave, so that only PLJS delegates would be present in the room.”

Archbishop and former PLJS Chairman Gintaras Grusas also welcomed attendees. Grusas, who grew up in California and now lives in Lithuania, related to many of the audience members through his experiences as an American-Lithuanian and as an active member of the organization during his youth.

Although times have changed significantly since he was active in PLJS, Grusas said it continues to provide many of the same benefits today that it did in earlier times.

“PLJS fostered a strong sense of the international community of young Lithuanians throughout the world and created a network of friends around the world,” he said. “It deepened our experience of our Lithuanian identity through both cultural and political projects, all the while strengthening our ties with Lithuania itself.”

He encouraged young people to “strive to help Lithuania maintain its proper place in the world community.…The personal benefits are enormous, but as in many other areas of life, what you get out of it depends on what you are willing to put in.  Putting in the time and effort not only leaves one with a stronger Lithuanian identity and benefits the Lithuanian community, but also provides valuable experiences and friendships that last a lifetime.”

During the opening ceremonies, Minister of Foreign Affairs Linas Linkevicius recognized Ray Bartkus, a  New York-based Lithuanian artist. Bartkus designed the 50 Lita note and has done illustrations for numerous publications, including the Wall Street Journal and Time Magazine. For this year’s summit, Bartkus created a life-size airplane landing strip from lights on the park’s main hill that lit up in the evening.

Keynote speaker, former U.S. Speaker of the House of Representatives Dennis Hastert, who encouraged the audience to take initiative through strong leadership, in his speech, “Responsibility to make our own history.”

Hastert explained what he calls the “four P's”: purpose, passion, persistence and patience. Citing his own experience in taking up to 12 years to pass legislation, Hastert said a combination of the “four P's” is needed to achieve your beliefs and to be present for the final victory. 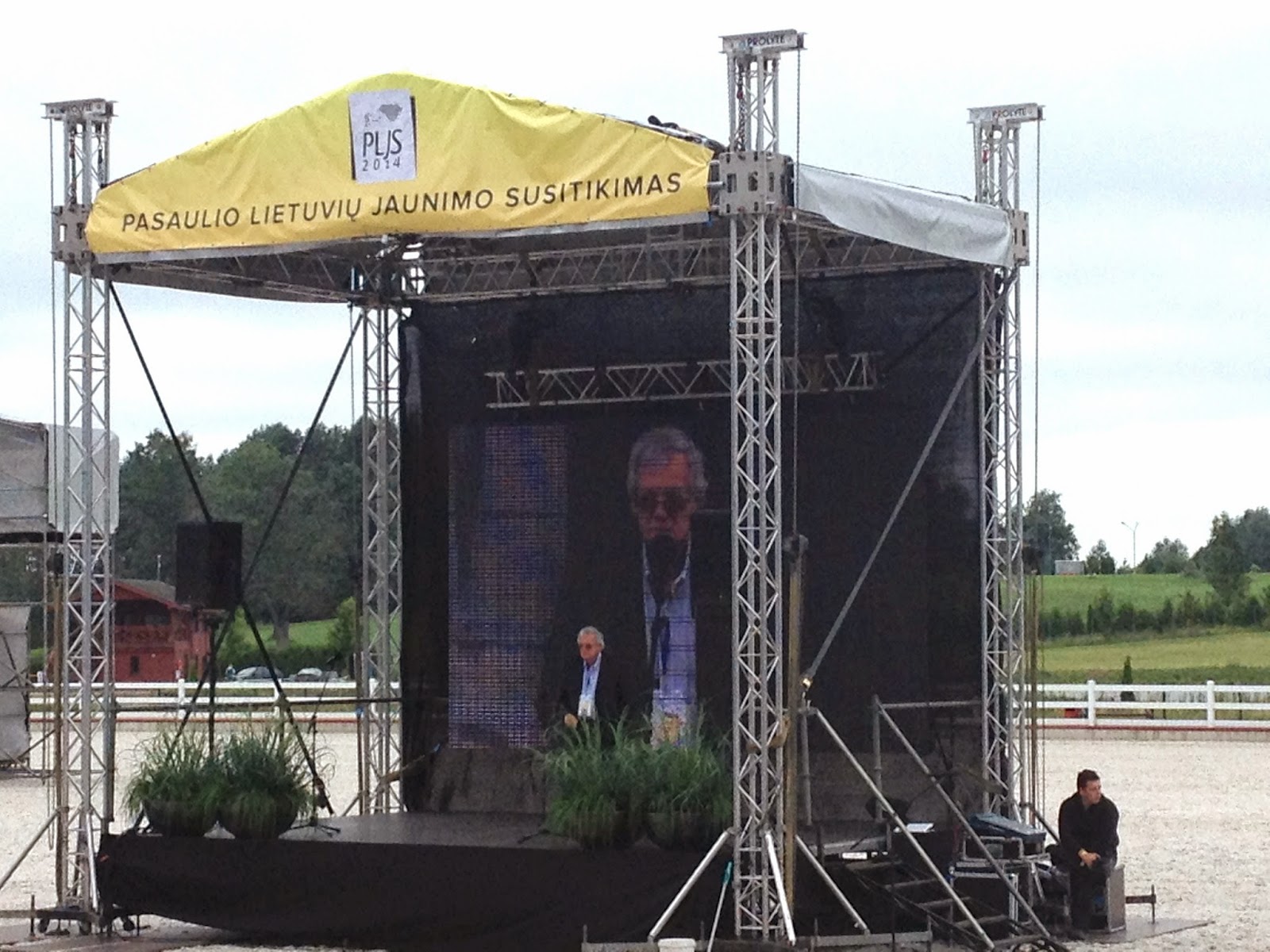 Former Speaker of the United States House of Representatives, Dennis Hastert, delivered an inspiring keynote and encouraged audience members to create their own history through effective leadership.

Another keynote speaker was Andy Khawaja, CEO of the e-commerce giant Allied Wallet, whose speech was titled, “The sky is the limit.” J. Michael Waller, a scholar-practitioner in public diplomacy, political warfare, psychological operations and information operations spoke of “The role of the individual citizen in global security.”

“My favorite part was looking into the audience and seeing such a large mass of young people who cared, who were interested and interesting, and who chose to be there,” said Rima Garsys, an American-Lithuanian from Florida. “I was so impressed with the relentless spirit around me that I wasn’t bogged down by the cold or rain. I was proud to be involved and happy I made the choice to participate.”

During the course of the summit, more than  150 notable lecturers and professionals took part in discussions. Kuliavas was impressed with Lithuanian Ambassador to the United States, Zygimantas Pavilionis’  speech about youth becoming involved Lithuania’s political future. 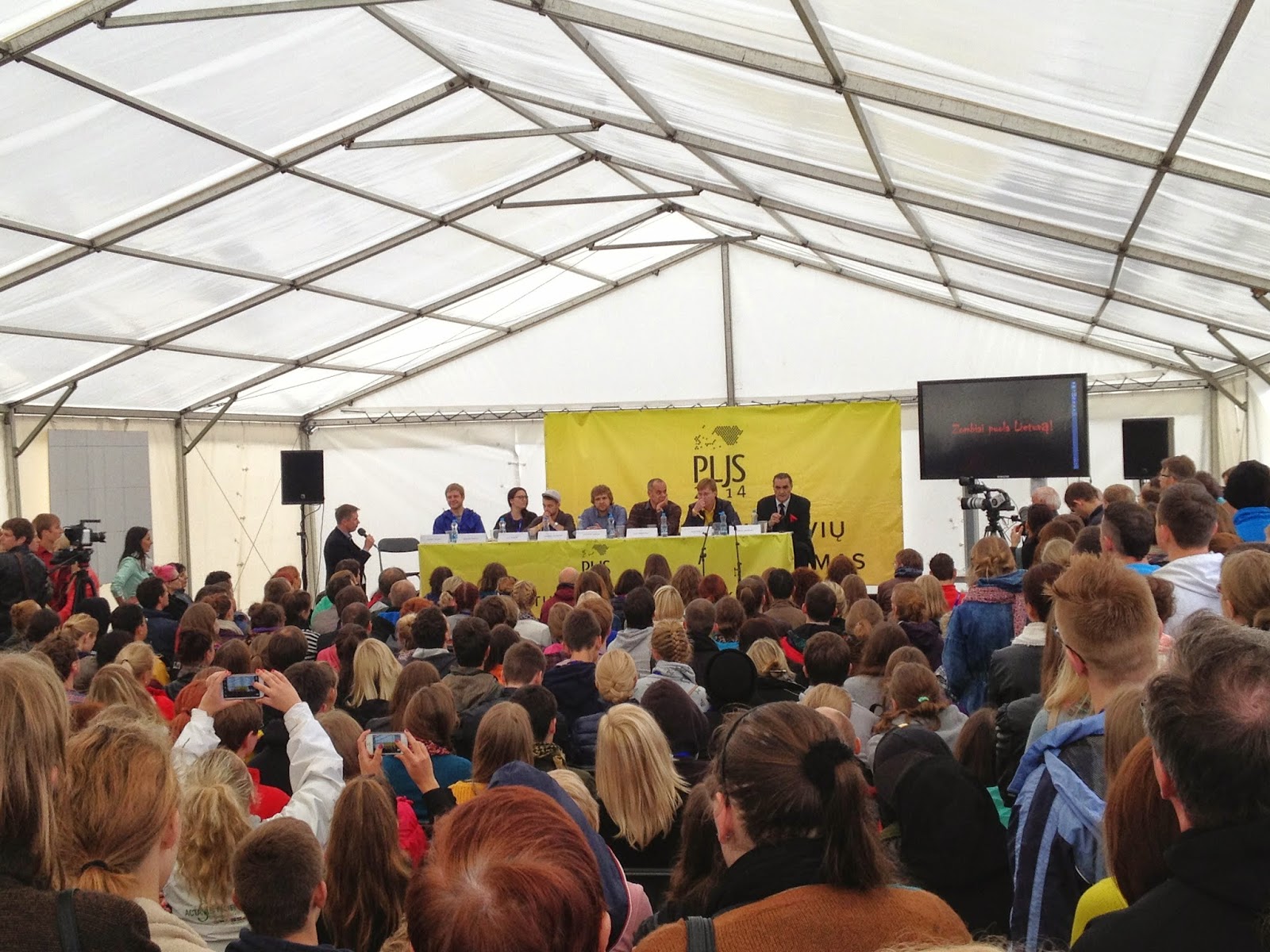 “I thought it was a well-rounded program in every aspect of what young people should be concerned about, ranging from a [cultural and political] zombie apocalypse to linty pop lessons," Garsys said. "I walked away a better person than when I arrived."

Seidukyte said she was impressed with the strong audience engagement and looks forward to the next summit.

“I believe that Lithuanians are a unique nation and we have to look out for one another,” she said. “It is always important to feel that you a part of something – a part of a community, a part of the world. I think that every Lithuanian felt this way at the PLJS Summit.”

Posted by Sarah Talalay at 9:25 AM No comments: