In our continued series profiling +Fulbright Program alumni, today we feature a post by Aiste Ptakauske who traveled this summer to the New York City to spend a month at the +Lincoln Center Theater Directors Lab. Here is her essay about the experience.

The summer of 2013 was the nineteenth summer in a row when the Lincoln Center Theater (LCT) gathered directors from all over the world into an LCT Directors Lab. For three weeks the LCT Directors Lab provided its participants with a truly lab-like environment where theater-makers experimented with their processes and ideas in hope to discover newer, better, fresher, and more exciting ways to create theater. All experiments were geared in one direction: from Page to Stage.

How do we direct contemporary plays for contemporary audiences?
What should be the relationship between the playwright and the director in the room?
What are the processes of developing new plays?

Coming to the Lab, we all thought we’d find answers to these questions. But these questions appeared to be just the tip of a much larger and harder iceberg… 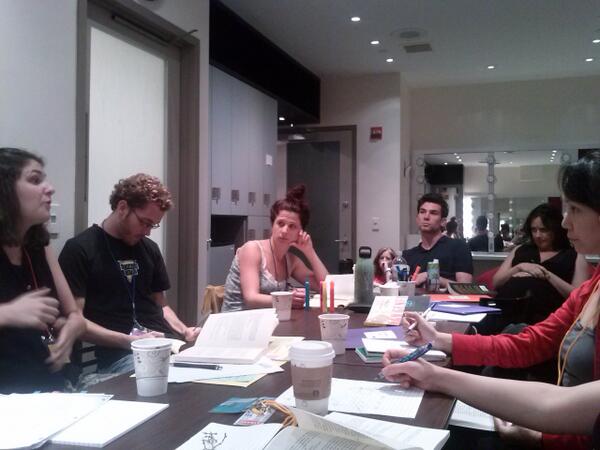 What the Secretary Said--John Kerry in Vilnius 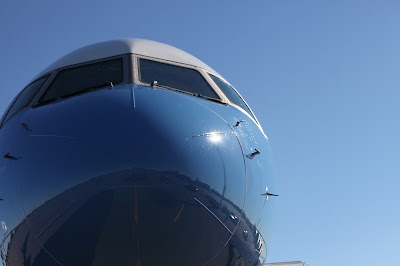 What has taken place here in 20 years plus one is really remarkable, and I am told that back in 1992 when we were first setting up shop here after the end of the Soviet Union, they had to bring truckloads of cash down from Finland in order to be able to just pay people because there weren’t even banks. It just wasn’t even functional. And so now, you all have this incredible burgeoning economy. We have – we, the United States, and Lithuania--have a remarkable relationship which is built partly on security, partly on economics, partly on democracy, on hopes about the future.

And what really excites me is what’s happening with respect to the energy diversification, climate change efforts, the efforts to create the European Eastern Partnership. All of these things are going to guarantee that not only will this relationship stay strong and flourish, but as we go forward, the economy here is going to get stronger, the democracy here will become more entrenched, and this will become really one of the great models for transformation out of a period of just kind of crushing restraint and oppression, and I don’t even want to go back to some of the stories. In fact, as I drove up here, the Ambassador pointed out what is now a Holocaust museum that used to be a place where the KGB used to take people and terrible, terrible things went on.

So that’s the transformation. All of you are part of this amazing adventure we get to be part of. I get to be the Secretary and parachute in like this for a few hours, and I know that these visits aren’t simple and a lot of work goes into them. I also have learned that the minute I get out of here, there’s a pretty good wheels-up party – (laughter) – which I never get to share in. But I just want to say thank you to you on behalf of America, on behalf of the President, and all of us who are privileged to work for our fellow citizens. There honestly is no more rewarding kind of work.

For those of you in the consular division, you’re the face of America. Somebody walks in and they talk to you and you have an interview and they need to get a visa, and they want to either emigrate or they want to just visit or be a student and go over and study or have an opportunity to sort of touch our values and our dreams, that’s a big deal. For many of you, you may be the only American people we’ll ever see. And whether you’re a civil servant or a Foreign Service officer, you get to come to work every day and build a bridge, build a relationship, reach out to people with a set of values that we all believe in, which historically have made a huge difference to people all over the world.

That is good work. That’s a great, great job. I wish it was better paying for everybody. It’s not what we all get into this for. We’re in it because we love what we do, we love the opportunity to change people’s lives, we love the opportunity to bring America to other parts of the world, and we love to build the friendships and the relationships that go with it. And they last a lifetime and they’re worth every moment of it.

In tribute to that, the Ambassador, Deborah, was just in Afghanistan, and we’re pleased that we have a special working relationship here in Lithuania for a small country – I think it was the smallest country leadership of the PRT – and working with us and others – Georgians, I think, and some others in there – we had this tremendous PRT effort. And just the other day – we’ve now transferred that PRT, as we are now transferring and transitioning out of Afghanistan – the PRT commander honored us, all of us, and particularly the Ambassador by giving to her the flag that was flying there.

It says “The USA National Flag was waving over Forward Operating Base Shield of the Lithuanian-led Provincial Reconstruction Team in Ghor Province of the Islamic Republic of Afghanistan. The hard work, dedication, and actions of the USA representatives directly supported and assisted the PRT to reach the goals and objectives in support of the ISAF mission,” and that’s dated 25 August 2013. Folks, that belongs to all of you, to this Embassy, to our efforts jointly, and it’s a huge statement about this wonderful relationship and participation we have. 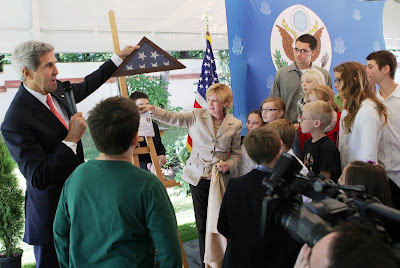 Posted by Unknown at 3:39 PM No comments:

Beer Ambassador? Not Quite, but a Great Time Was Had by All

When Don Russell, a nationally know beer columnist from Philadelphia, agreed to come to Lithuania to explore local microbrews and share the experience of American brewers, he probably didn't know his report of the trip would end up in Washington Post.
But it did. Whether it was the great variety of Lithuanian micro- and nano-brews, or the great interest in Don's experience as a blogger and writer, or the beatiful summer day Don spent at the Pakruojis Beer Festival--there was plenty to write home about. Here some highlights Don especially enjoyed:

In Vilnius, members of the local chapter of the Chaîne des Rôtisseurs, the worldwide gastronomic society, agreed that the Philly beers served with a gourmet menu were at least as good as wine. So good, in fact, it took them just three hours to nearly polish off a supply of Yards and Weyerbacher that was supposed to last a full week.

At a beer festival in Pakruojis, a small town not far from the Latvian border, I was introduced to the mayor as "Donas Russellas," and the organizers let me help tap the first keg.

In a taping of a popular Lithuanian cooking show, "Virtuves Mitu Griovejai", I gobbled down an excellent Asian-spiced salmon dish that the hosts had simmered in +Yards Brewing Co. George Washington's Tavern Porter.

At the U.S. Embassy in Vilnius, I briefed Lithuanian journalists and bloggers on the growing American microbrewery scene. Then I presented the deputy chief of mission with a +Philly.com Beer Week T-shirt, which he promptly wore at the Pakruojis festival, where we greeted more than 4,000 attendees.

At a farmhouse brewery in Joniškelis, a village 175 kilometers north of Vilnius, I was smothered in kisses by a brewer's wife (or cousin or fiancée - it was kind of lost in translation). Apparently"Virtuves Mitu Griovejai" is her favorite TV show.

"John Kerry, eat your heart out," wrote Don in his column about the trip. When you watch this video, you'll probably agree.

Posted by Unknown at 8:13 AM No comments: