I will not say that Americans do not like soccer, known here as 'futbolas', but it certainly is not the most popular sport in the US. The great American sport is baseball, as many people know. In the recent past, however, football (American football, that is) has come to take the spotlight in America as the sport that people go absolutely nuts over. During football season, you can't go anywhere without seeing a team's jersey. People paint their faces, their bodies, buy foam fingers...they yell and scream and cheer as if the results of the game will determine the rest of their lives! 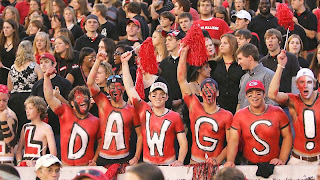 So you can imagine my excitement when a few of my Lithuanian friends invited me out to watch the UEFA (The Union of European Football Associations) Champions League Finale, between Bayern Munich and Dortmund. Before the game, we went out to dinner and one of my friends, Karolis, was wearing a T-shirt with his favorite Bayern player on it. As he was explaining to me the importance of this game, he kept pulling his T-shirt up to kiss it over and over. This to me was not strange, it was the same as any other American who is wishing that their team will win the Superbowl. Kissing his T-shirt was just a way of showing how much he wanted Bayern to win.