A Different Kind of Fishing...

On one of my latest adventures here in Lithuania I tried something I have definitely never done before, or actually seen anywhere other than on television: ice fishing! It was a fun and fascinating experience to say the least.
Fishing is one of my favorite things to do at home. My family lives near a big lake that is split between the states of North Carolina and South Carolina. This lake is typically busy with fishermen and different fishing tournaments because it is full of big, hungry catfish. The main difference between this lake and the lake I fished on here in Lithuania is the water temperature; our lake in the Carolinas never gets below 10 degrees (or 50 degrees Fahrenheit as we would say). If there was any ice on the water we would all panic! We can fish from a boat or from the shore year-round. When I first arrived in Lithuania this January and saw the big frozen sheets of ice floating down the Neris River and the frozen Galvė Lake in Trakai, I saw no hope in continuing fishing while here. But this changed when I was passing a lake one day and saw people sitting on the ice in different places. Curious as to what they were doing I asked someone I was with, who informed me that they were ice fishing. Since then, I’ve been searching for someone who ice fishes who would be willing to take me along. I was able to find two gentlemen who frequent a small lake outside of Vilnius and were willing to take me and show me the ropes. 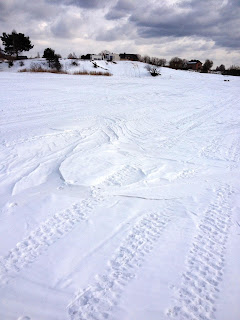 Ice fishing is different than what I am used to, so I had a bit to learn when we got started. To ice fish, you have to drill a hole in the ice where you can put your fishing line and eventually where you can pull your big catch out of the water. To drill this hole, there is a special tool called an auger that turns in circles like a big screw to create a hole. Some augers come with motors, but the auger we used had to be worked by hand. When we created our hole for fishing, we used a ruler to measure how thick the ice was. It was very thick where we were fishing, a total of 38 centimeters (more than a foot)!
After we each drilled our hole in the ice to fish through, we had to bait our hooks. For my hook, I used a few live mealworms. We hoped that since they were alive, they would grab attention and bring the fish out the depths. The poles we used were small; I’m not very tall so I’m used to my fishing pole being much taller than I am, but these were as small as my forearm. The day that we went fishing the temperature was well below zero and the wind was blowing very hard. It got so bad at times that if we got up from our chairs, they would blow over. Additionally, the holes that we were fishing in would freeze back over in minutes, so we had to use a tool to skim the new layers of ice off the top every few minutes. We sat outside in the cold and wind waiting for a bite on our hooks, but we were ultimately unsuccessful. 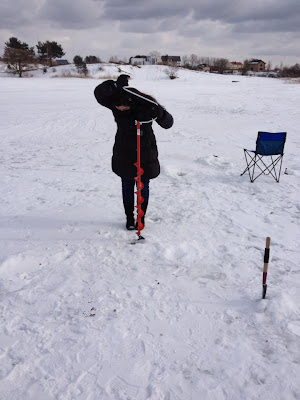 Overall, I do not really mind that we did not catch any fish! To have had the opportunity to try an activity that is actually completely impossible to do where I come from was a satisfying experience all on its own. I’m hoping to go ice fishing again before the ice gets too thin… I’m feeling good about our chances of catching a big fish! 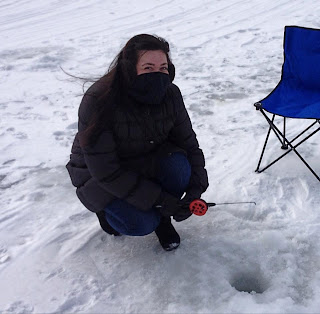 On Friday, March 22, I was fortunate enough to be able to participate in one of the Embassy’s outreach programs, where six representatives from the US Embassy went to the annual English Song Contest in Tytuvėnai. This song contest brings together schools from across the Kelmė region under the overall theme, “Music Unites Us”. Students prepared songs to perform in English for a panel of judges, which this year included the three interns from the US Embassy, myself, Meredith, and Michael, as well as two music teachers from the region. 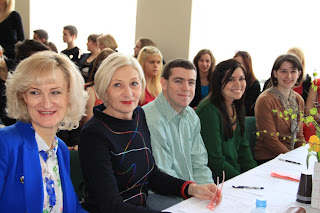 Students performed songs that they picked to be considered “Future Hits” – it was open to interpretation as to how they would each pick their song. Songs varied and included such hits as “We are the World” by Michael Jackson, “Highway to Hell” by AC/DC, and “Raise your Glass” by Pink. It was a diverse range of music, and that made it all the more fun and interesting to watch. The contest was divided into two age groups; grades 5-8 performed first, and those from 9-12 performed in the second half. The acts from both groups were so much more than I could have ever expected -the students were very talented singers and dancers, and the productions included choreographed dances and musical instruments and even costumes. It was obvious that they put a lot of time and effort into preparing, and it really made it feel like I was at a concert! At the end of the contest there was an awards ceremony, where the top three performances from each of the two age groups were recognized. Truly, every participant did an excellent job. We took a long time to come to a decision on who would be in the top three, as everyone really deserved to win considering their hard work and talent. 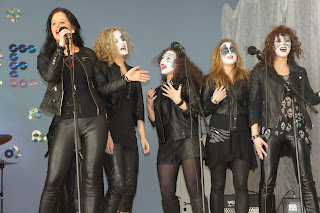 After the contest was over, we were fortunate enough to see a little bit of Tytuvėnai. Some of the students gave us a tour of the monastery in the city. The monastery was like nothing I’ve ever seen before. It dated back to the 1630s – way before the United States even gained independence! The building had an unbelievable courtyard outside and striking artwork and architectural details inside. Not only was I impressed by the place itself, but also by the passion displayed by the students for the culture and the history of their city. There wasn’t a question we asked that they couldn't answer, or a fact that they didn’t present with genuine excitement. It was fun to learn from them about their region and the beautiful monastery that they were so proud to show off. 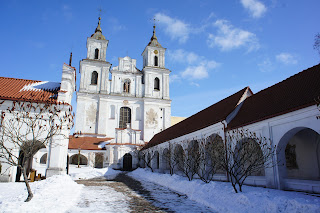 Overall, the trip to Tytuvėnai was a fun and informative experience. We learned about the region and the monastery through the student tour, and music truly did unite us at the English Song Contest. Everyone sang and danced and clapped along to the music, allowing us to have fun and laugh together, transcending cultural boundaries and language barriers. 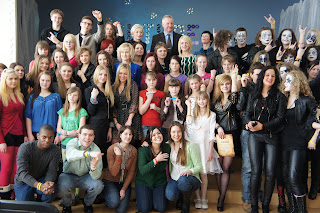